Sakura Inami (伊波 桜 Inami Sakura) is one of the secondary characters of the Kyoukai no Kanata series. She is the second daughter of a family to whom Mirai is indebted. She came to Nagatsuki City in pursuit of Mirai, who killed her older sister, Yui.[1]

Sakura is a very pretty young girl in appearance with shoulder-length brown hair that is tied up in an odango style and red-pink eyes.

After she reconciles with Mirai Kuriyama, she is seen wearing more snug and comfortable homely clothes, which are usually a pair of shorts below a faded red top. Her nightwear outfit is only a dark blue sleepshirt with red linings at the neckline and sleeves and has BISCUIT printed on the front along with a yellow smiley face. She also seen occasionally wearing her school uniform.

Matching her indifferent personality, her school attire consists of the standard girls' uniform of a light blue and white sailor dress and a carelessly doused sky blue sweater hanging over her hips tied around her waist by the sleeves. When in the pool she wears a light blue one piece swimsuit with white linings at the shoulders.

With a monotonous speech pattern and an almost emotionless face, Sakura is portrayed as a girl transformed by revenge into a singleminded machine bent on killing the one responsible for the death of her sister.

However, with the progression of plot, she is revealed as a soft hearted and loving person who often tries to act strong, shelling up her true, regretful feelings towards Mirai Kuriyama and trying to kill her for the sake of proving that she does indeed have the calibre of a spirit world warrior. Due to her such tendencies, she is fooled into strengthening the weapon of Miroku Fujima. She poses a careless attitude, as she doesn't mind grasping the whereabouts or even name of the person she has borrowed her weapon from.

Her carelessness is evidenced a second time when she leaves her weapon behind without considering it to be returned to the rightful owner when Mirai confronts her about her true abilities and asks her to stop acting strong or try to change into someone else as her older sister had envied her greatly for unknown reasons.

Once she befriends and forgives Mirai, she is shown to maintain a calm, composed demeanor with a dead-pan sense of dark humor. She often puts on embarrassing pranks as seen when she pushes Mirai over a dozing Akihito and puts on glasses quite nonchalantly in the same scene without considering the obsessiveness of Akihito towards glasses. She is not very education-oriented and is often being nudged by Mirai to follow a school schedule and to wake during classes.

She is also shown to be caring in the same emotionless manner even after as evidenced when she kicks a naked Mirai into the bathtub, laced with anger, care and frustrated concern, murmuring slowly afterwards that she (Mirai) finally responded a proper response after encountering her kick.

Not much is known about Sakura yet, but it is proven that she has spent her childhood with Yui Inami along with Mirai Kuriyama in their early days. A photo of the three of them is shown at the opening and a quick preview of them taking a picture in front of the Inami residence is shown at the near end of the opening.

Compared to her older sister, Sakura does not have spiritual abilities to be a Spirit World Warrior like her older sister or Mirai. So to do what she could for Mirai and her older sister, Yui, she attempted to cook for them and learned how to cook since it was the least she could do for them as someone who couldn't be in the same world as them. When Yui was killed by Mirai, Sakura, at the moment, didn't hold any hatred for her. Instead, she offered a sandwich with a little flag with Mirai's name on to a mourning and crying Mirai.

It is revealed that Sakura has always been envious of Mirai and Yui for their abilities to be a Spirit World Warrior leading to Mirai to tell how Yui was envious of Sakura for being a normal girl.

After some time of solitary travel, Sakura reaches Nagatsuki City and looks for her target, Mirai Kuriyama, within the neighborhood. Her search was successful as she was able to track down Mirai while the latter was en route to the nearby mountainside, where Mirai awaits the arrival of the Hollow Shadow. Sakura quickly attacks Mirai as the youmu creeps over the mountains and continues her attack while inside the youmu's illusions, disregarding the fact that the youmu is a bigger threat than Mirai herself. Their short one-sided match in favor of Sakura was interrupted by Akihito, who fled with a weakened Mirai further inside the Hollow Shadow's illusions, and Sakura immediately gives chase, only to stop when Mirai is forced to fight the Hollow Shadow by herself.

Shortly after the defeat of the Hollow Shadow, Sakura flees from the scene.[2]

She is seen once again, this time posing a full fledged duel to her adoptive sister. In this round of fight, Sakura is immensely tired from the yonmu stone hunting for her weapon, draining her ability to fight sooner than before. Mirai notices this and asks about the weapon that Sakura wields. It is revealed that it is a yonmu weapon and feeds off of yonmu stones to grow stronger. In return for the weapon, that allows Sakura to be similar to a Spirit World Warrior, Mirai's life is the cost for Sakura to keep the weapon. While she is tends to show little emotions besides anger, Mirai confides that she knows how Sakura really feels and she finally gives in to her. The yonmu weapon fires back and tries to consume Sakura, but Mirai is able to stop the tentacle like yonmu from consuming Sakura. Mirai takes her back to the rented home and they begin to live together from the point onwards. Though Sakura shows little interest in going to school saying that she only enrolled for chances to kill her, but now that they reconciled there was no point. Mirai is constantly pushing her, and she is forced to accompany her, even though she manages to delay both of them. She is seen, from that point on, almost everywhere with Mirai, at home, at school and in most fights, discussing her emotions and Mirai's concern for Akihito occasionally with her. Sakura at this point acts more like a sister to Mirai and shows genuine distress when Mirai dissappears, kicking Akihito upon confronting him about her whereabouts.

In the anime ending it is shown that she has become friends with Ai Shindou, going to school together in the morning.

In the Movie Mirai Hen - After Mirai losses all her memories after the events of Beyond The Boundary, it is shown that she wants Mirai nothing to do with Akihito. It is later revealed that Sakura was just acting upon the request of Akihito to prevent Mirai past memories as a Cursed Blood Spirit Warrior to come back so that Mirai can lead a normal life. Sakura in the movie shows hurt upon seeing Mirai's suffering and confusion about everything that is going on around her. She constantly reassures Mirai since they are friends since they were kids. Sakura is also intensely protective of Mirai, since Mirai lost all her memories as a Spirit Warrior, Sakura will go to lengths at her own cost to protect her from the shadow youmu chasing after Mirai.

In the movie end credits, Sakura, Mirai and Ai are shown busy with the tennis club activities as well as hanging out with the Nase siblings.

It is stated by Mirai that Sakura's powers as a Spirit World Warrior should be near non-existent which made them curious as to what gave her strength and ability that potentially rivals Mirai.

During the events in episode 5, it is shown that her spear has the ability to absorb the essence of Youmu after being defeated. Due to this, it may be possible that what gives Sakura her power is the spear itself by which origin is unknown. 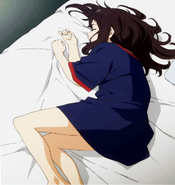