Edit
watch 01:36
We're Getting Mutants in the MCU - The Loop
Do you like this video?
Play Sound

Hiroomi Nase (名瀬 博臣 Nase Hiro'omi) is one of the main characters of the Kyoukai no Kanata series. He is the older brother of Mitsuki Nase.

Like Mitsuki, he comes from the prestigious Nase family. Due to his Spirit World Warrior abilities, he is extremely sensitive to cold, causing him to often wear a scarf or muffler.[1] He also has a weird little sister fetish.

Hiroomi is a young male of average height with bowl-cut black hair that has bangs hanging over his eyebrows and green eyes.

He is often seen in his school uniform with a red and black scarf or muffler.

In the movie Mirai Hen, he is seen wearing a formal suit.

Three years before the start of the series, Hiroomi tried to subjugate Akihito Kanbara's at Izumi Nase's request. During that mission, Miroku Fujima injured Akihito to the point that Akihito's youmu side surfaced. In that form, Akihito almost killed Hiroomi.

In the Mirai-Hen movies he is shown to have succeeded the Nase household in the wake of Izumi's disappearance. Hiroomi appearance in the film changes as he now wears a black trench coat but still with his signature scarf. It is shown that his skills have improved drastically in creating a barrier cage.

Mitsuki is Hiroomi's younger sister who often bicker, but they quickly reconcile and he is shown to have a strong sister-complex involving her as he blushes or suffers a nosebleed when she calls him "Onii-chan." His ringtone is Mitsuki saying "Onii-chan, I love you". He loves his younger sister a lot that he always tries to protect her from harm. Even so, he sometimes hides secrets from her because he doesn't want her to worry.

After Hiroomi's assignment to kill Akihito two years ago, Hiroomi and Akihito have been hanging out, often joking with each other. A running gag is Hiroomi's tendency to put his hands under Akihito's armpits, much to Akihito's annoyance and once leading Mirai to comically question whether they were secretly 'seeing' each other. Hiroomi cares about Akihito and sees him as a good friend, shown when Izumi asked him to kill Akihito to which he replied, "Like I could kill him".

In the Mirai Hen film ending, he and Mitsuki are shown overjoyed upon the return of Mirai and Akkey. He jumps on Akkey and it is implied off screen that he cried upon his return.

It is shown that they do not share a close bond, but rather one of respect, as he states that he looked up to her as an idol. But at the end of the anime series, he renounces her, saying that he wants to be nothing like her. In the film's flashback, Izumi reluctantly allowed herself to be injected with a parasite type youmu enable for her to become stronger and protect those she loved.

In the film Mirai Hen after Izumi's disappearance, Hiroomi took over the Nase household but had to face off with Izumi at it is revealed that she was the hooded figure attacking various spirit warrior under the control of a parasite youmu. He and Ayaka tracked Izumi down but Ayaka noted and teleported that Hiroomi could not do to his love for Izumi hurt his sister. In the final face off with Izumi, Hiroomi states that he should not have been chasing after her but rather supported and walked together with his big sister instead. The film ends with the Nase siblings reconciling.

A key trait common to the Nase family, Hiroomi possesses the ability to erect barriers called Glaciate Barriers, which act as a defensive barrier and an obstacle to most youmu. He shows commendable skill in erecting these barriers, which held its ground during the appearance of the Hollow Shadow, although it was unable to withstand Akihito when he transformed into a youmu.

Hiroomi can make youmu disintegrate using his scarf. The scarf only needs to touch a youmu to disintegrate them, and Hiroomi has used his scarf to slice down youmu upon contact or outright destroy them by trapping them inside the scarf itself. Apparently, this ability is responsible for his sensitivity to cold. While fighting, sometimes he can't focus if Mitsuki is worrying about him. 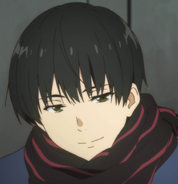