Beyond the Boundary the Movie -I'LL BE HERE-

The theme song of the "Future Arc" is Aitakatta Sora (会いたかった空, The Sky I Wanted to Meet).

The staff of the anime series will return to work on the movie, with direction by Taichi Ishidate, screenplay by Jukki Hanada and character designs by Miku Kadowaki.[3]

The movies expand on the story of anime series. Kako-hen (Past Arc) is a retelling of the anime series, while Mirai-hen (Future Arc) is set a year after.[3]

Kako-hen is a simplified version of the anime series.

The movie picks up one year after the end of the anime. Mirai Kuriyama has returned, Hiroomi Nase has graduated and the only members of the Literature Club are Mitsuki Nase & Akihito Kanbara. Ayaka Shindou & Ai Shindou continue to live in the photo shop appraising Youmu, while Shizuku Ninomiya continues to be dumped by men and fight Youmu. Hiroomi Nase has taken over the Nase household in the wake of Izumi Nase's disappearance. Mirai Kuriyama now lives a seemingly normal life with Sakura Inami, but in a flashback it is revealed that when Akihito went to Mirai on the roof to see her she no longer had any memory of Akihito Kanbara, her fight with Beyond the Boundary, or any of her past.

Mitsuki & Akihito continue to watch over Mirai, while in the clubroom Mitsuki asks if any change has happened with Mirai. Akihito answers that nothing has. But even though Mirai has lost her memory, she still seems to gravitate towards her past. When asked about joining a club, she answers with the Literature Club and seems flustered when Sakura confronts her for joining because of Akihito. Sakura tells Mirai that he is nothing more than a pervert who happened to be passing by. While on the tennis court Mirai notices Akihito and begins to run to him, but is suddenly hit by a ball. By the time she is able to look for him he has disappeared. She asks Sakura why he was the one to come to her and why he appeared to be so sad if he was just a passerby. She attempted to ask, but he only said that he didn't know and avoided her ever since.

Meanwhile Hiroomi Nase & Shizuku Ninomiya come across human shaped shadows that attack on sight, unable to tell if they are puppets or actual Youmu. It is discovered they even when sliced they are able to reform themselves. As Mirai Kuriyama & Sakura Inami are walking home they stumble across one of the shadows. While running away, hooded figure asks Mirai, "Lonesome one, do you wish to know who you are?" By instinct she is able to avoid an attack by jumping. Hiroomi attempts to capture the hooded figure, but it is able to break the barrier and disappears, taking the shadow with it.

Mirai again attempts to ask Akihito about her past, but Hiroomi, Mitsuki reinforce the fact that Akhito is just a deviant who goes around asking cute girls to wear glasses and that he happened to be a passerby. Later that night Mirai notices blood on her hand; thinking that she cut herself, she notices that the blood around her ring appears to be floating.

The next day she has joined the Literature Club as Vice-President with Mitsuki's permission. Seeing the bonsai plants, she comments on their upkeep. Mitsuki and Akihito decide to keep her within sight so they can protect her against the hooded figure and shadows that have been attacking and defeating Spirit World Warriors around the city. Hiroomi visits Ayaka and Ai, trying to find information on the shadows; at first they were thought to be puppets because of their indiscriminate attacks, but being powerful enough to defeat near A rank Spirit World Warriors means they may be Youmu; it is perplexing because of their almost mindless attacks. Hiroomi comes to the conclusion that they may wait and see what happens next. Ayaka Shindou then questions his methods, saying that he is weaker than his sister and that the balance and benefit between the Nase household and Youmu is beginning to weaken and as such would cause the Youmu to not align themselves with them. When Hiroomi leaves, Ai Shindou comforts him, saying that Ayaka has high expectations for him because they do not wish to leave.

Sakura Inami confronts Akihito, saying that she has done everything that he said to try for Mirai to forget her past and that it did not work. Mitsuki tells Akihito to talk to Mirai. Mirai picks Aizeriya. When asked, she says that it caught her eye, but in a small flashback it reveals that they had eaten at Aizeriya before, where Mirai was able to eat an enormous amount of food, to Akihito's chagrin. In the present, Akihito explains that he enjoys sharing a meal with a pretty girl in glasses, whereupon he begins to pull out a pair of glasses for Mirai to try, to which she suddenly says "「不愉快です」 "Fuyukai desu"?" hinting that even though she has no memory, that the real Mirai is still inside.

In the Nase household, Hiroomi is frantically trying to find the whereabouts of the shadows, sending all of his agents out searching. In another part of town, two Spirit World Warriors come across a shadow and are taken aback by who they see before being killed. Meanwhile, while walking home Mirai and Akihito come across the same park where they spoke in the anime. There Mirai says that the reason that she came out was that she wanted to apologize for being insistent and to tell him that it was the last time to speak to him, but when he was kind to her, she realized that they had shared a connection beyond just being friends. She then reveals that she has discovered her ability to manipulate her blood. She assumes that this is the reason that she and Akihito cannot be together.

Suddenly the hooded figure appears and attacks both Mirai and Akihito. Akihito's foot is severed and he tells Mirai to run, but as the figure lunges Mirai defends herself and sprayed the hooded figure with her blood, causing the cloak to melt and revealing Izumi Nase. She then stares into Mirai's eye, triggering a flashback. Hiroomi appears, causing Izumi to have a moment of clarity but this soon dissipates, causing her to become hostile. Before she is able to escape Hiroomi places a tracking spell on her leg. She then disappears. Izumi is then shown kneeling before another hooded figure, showing that she is not the only one behind the scenes.

Hiroomi and Akihito then make sure that Mirai gets home. When Akihito returns home he is greeted by his mother Yayoi Kanbara who much to his aggravation is dressed up as half a woman and half a man. He swiftly hits her in the head. Yayoi then resolves to help and do something about Izumi and Hiroomi. Meanwhile Hiroomi runs into Ayaka who is also on the search for Izumi, bringing up the question of the two eldest Nases now set on killing each other.

Back at her apartment, Mirai answers the door to see Akihito who has returned to talk. She tells him that she would like to talk outside. As she grabs some things from her apartment she receives a phone call from Akihito saying that he would like to meet up, and she realizes that the one at the door is a fake. This turns out to be Miroku Fujima, now disfigured. He is able to restrain her and explains that the Youmu that he harbors can be spread entirely through sight and brings its host into the darkness of one's own mind. He makes her believe that her past objective of killing the Beyond the Boundary is still what she needs to do.

In the forest Hiroomi and Ayaka are closing in on Izumi. At the last minute Ayaka transports Hiroomi away as she states that he will be unable to kill his own sister, so she will take care of her. At Mirai's apartment, as Akihito makes his way to Mirai she is soon consumed by the darkness and her appearance changes, her hair turning black and eyes yellow, while growing shadow claw appendages from her body. Mitsuki and Shizuku arrive and try unsuccessfully to hold her off. They follow one of the shadows into an abandoned building where they find the other hooded figure, which turns out to be the dead body of Miroku. A video then plays of him taunting them, telling them that he is dead and that he implanted a Youmu inside both himself and Izumi, providing him a vessel after his death. He then proceeds to tell them about the Youmu and how it brings out the darkness inside them, haunting them with illusions. It is also revealed that the shadows are the Spirit World Warriors that have succumbed to the darkness.

Suddenly Mirai catches up to the group and tries to kill Akihito. In a flashback her mother reminds her that the reason they are in this world is to kill Beyond the Boundary. As the battle proceeds, Ayaka suddenly falls through the skylight, defeated by Izumi. A flashback shows Izumi voluntarily taking the Youmu from Miroku to gain the power to protect everything she holds dear. In the present Hiroomi tries to reach out to Izumi, disarming her and stating that they should of been there for each other, which causes her to stop attacking.

The battle between Mirai and Akihito continues and she attempts to kill him. Akihito realizes that the key to getting through to her lies in the ring that she has always worn. He then allows her to mortally wound him and tells her that he cannot be killed. He is then transported into Mirai's subconscious where he sees flashbacks of her past and the persecution of her and her mother for being in the Cursed Clan. It is then shown that her mother died to protect her, and that all this time she has felt alone and to be a monster because others have done nothing but hate her. He is able to reach out to her by confessing his love and promising that he will protect her from now on, no matter what.

She comes to terms with her past, realizing that she was able to bring happiness to her mother. In the real world it is shown that Ayaka and Izumi are unconscious but otherwise all right. It is also implied that Yayoi is actually a gatekeeper between the two worlds, and has been watching over everyone. In the following credits it is shown that Izumi is recovering and that life has returned to normal. Mirai and Akihito have officially become a couple, and Akihito states that he loves Mirai even without glasses. 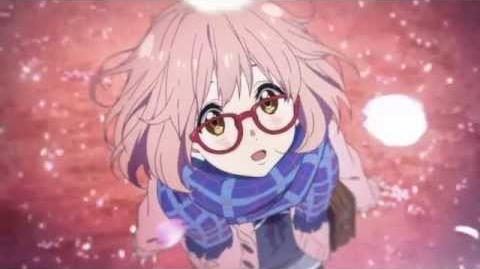 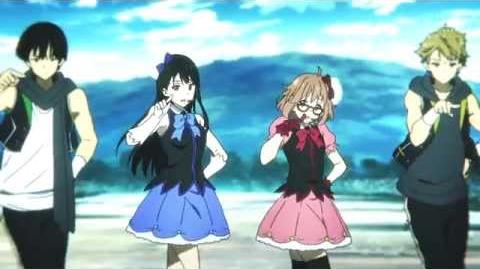