Edit
watch 01:36
We're Getting Mutants in the MCU - The Loop
Do you like this video?
Play Sound

Ayaka Shindō (新堂 彩華 Shindō Ayaka is one of the secondary characters of the Kyoukai no Kanata series, a Spirit World Warrior introduced as a human in the original light novels and a youmu with a nine-tailed fox form in the anime series.[1] Ayaka is the link that connects Akihito Kanbara to the world of youmu and Spirit World Warriors, and is also the one who reads the postcards his mother sends to him.

She always wears a black kimono with a fitting obi and imprints of red flowers at the bottom. Over her kimono, she wears a yellow haori with beige dots on it. Along with this she wears white socks and zōri with a red hanao.

Ayaka is a knowledgeable and mysterious woman who always appears calm and level-headed. She has a sense of humor that could almost be called cruel as she did not spare Akihito Kanbara from showing Yayoi Kanbara's (Akihito's mother) embarrassing message to outsiders while casually calling her "big-busted" and "kind of crazy" in one sentence.

Ayaka poses as an intellectual and can relatively hide her powers and abilities very well. She teases people around her every chance she gets and is seen to have take pleasure in it. She intentionally lets off some details to see the reaction of Mirai Kuriyama while explaining about a youmu that threw off stinky liquids upon sensing danger.

She however, shows her serious side during harsh times, and even so, acting soft and calm to the people around her for the sake of avoiding panic.

She is also a money minded woman as shown when she prohibits Akihito to take pictures of Mirai in a bunny outfit before paying her up.

Towards Ai Shindō (Ayaka's younger sister), she shows a kind side who calmly allays her to have no fear when their house is surrounded by countless Youmu.

Despite being a youmu herself, Ayaka has been working with the Spirit World Warriors of Nagatsuki City for at least three years. She lives with Ai Shindō in a detached home that acts as an appraising office for youmu slain in battle or a photo studio with a cafe for the uninitiated.

At the present time, Ayaka is an acquaintance of Akihito's, serving as an activator of sorts for the specially made postcards Akihito Kanbara receives from Yayoi Kanbara (Akihito's mother). She meets Mirai Kuriyama after slaying a youmu for the first time and she warmly accepts her as Akihito's friend, although she remains fair in assessing the youmu stones Mirai hands out to her.

During the Calm, she was gravely affected like Akihito and Ai Shindō, but she was able to fend off the attacks of Miroku Fujima while defending the weakened youmu. Ayaka was later absorbed into the youmu Beyond the Boundary but managed to survive after helping Akihito and Mirai in defeating the hostiles absorbed by the gigantic youmu.

Ayaka has shown to be very knowledgeable about Youmu and their worth, which is why the local Spirit World Warriors hold her in high esteem. She could also build up effective barriers. One was used to ward off normal people so only Spirit World Warriors could meet her. However, the barrier was actually too strong for Mirai Kuriyama to see through it. The second barrier was shaped like a giant dome and could annihilate several Youmu at once while expanding. Its intention was to hold off the mighty "Hollow Shadow".

In her youmu form, she is a big, white and surprisingly powerful (even during The Calm) nine tailed fox (kitsune). Also in this form she can project a powerful energy blast from the mouth and erect protective shields. 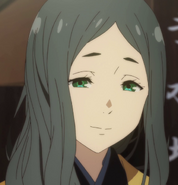 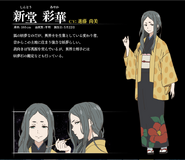 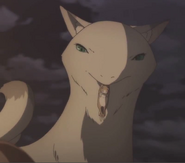