View source
watch 01:36
We're Getting Mutants in the MCU - The Loop
Do you like this video?
Play Sound

Akihito Kanbara (神原 秋人 Kanbara Akihito) is the tritagonist of the Kyoukai no Kanata series. He is a second year student and a member of his school's Literary Club. He is a Half-Youmu and has the ability to instantly heal from his wounds. Unlike most people, he is mostly familiar with the affairs of Spirit World Warriors and Youmu. Because of this and his unique trait, he becomes a subject of curious scrutiny. His youmu side is called Kyoukai no Kanata (the Beyond the Boundary) which takes over his body when he is seriously injured [1].

Akihito is a young man with average height with short blonde hair that is swept to the left and brown eyes that tilt downward or tareme eyes.

He is primarily seen wearing his school uniform.

Akihito is a very playful, friendly and somewhat sarcastic yet sincere person who likes glasses very much, referring girls who wear them as "bespectacled beauties". This even reaches the point of proclaiming himself as a "meganest", which means an extreme fetishist for glasses.

Akihito was born as a half-Youmu from a human mother and immortal Youmu father. Since Akihito can manipulate fire and able regenerate from nearly any injury, it is possible that his father is a very strong Youmu .

During his childhood, he was involved in a car accident, but he survived unscathed. As a result, people fear him and isolate him. Nothing else much is known about his past but it is known that during his first meeting with Hiroomi Nase and Mitsuki Nase, Akihito was seriously injured by Miroku Fujima and his Youmu side awakened and almost killed Hiroomi. Due to this, the Nase family arranged a deal in order to avoid further incidents related to Akihito's Youmu side.

In spite of his bloodline, Akihito manages to live through school life like most students, although he often spends his time alone. His usual companions include Mitsuki Nase, the president of the Literary Club and Hiroomi Nase, an acquaintance of his who acts as a "watchman" of sorts.

One spring day, Akihito meets a girl in glasses after seeing her in the edge of the rooftop, as if attempting to jump off the school building. This girl named Mirai Kuriyama would stab Akihito in their first meeting, only to be surprised to see that he survived the sudden attack [2]. Akihito would spend the next week being impaled by Mirai's weapon, a sword made out of her own blood, in several attacks made by Mirai inside school premises.

Mirai soon confesses that her tendency to attack Akihito stems from her lack of self-confidence in fighting youmu. To answer this problem, Akihito decides to help out Mirai in gaining the confidence to fight youmu by herself and to earn some money from her duties as a Spirit World Warrior.[3] Both Mitsuki and Hiroomi prohibit Akihito from interacting with Mirai, but Akihito stubbornly pushes through. His efforts eventually paid off, as Mirai successfully defeats the Hollow Shadow, noted as one of the most powerful youmu, although at the cost of Akihito almost losing control of his youmu side.[4] Following the Hollow Shadow incident, Akihito's friendship with Mirai slowly develops as Mirai finally joins the Literary Club after Akihito's many attempts to recruit her.[5]

The Calm and the Storm

Weeks later, Mirai is already a usual sight in the Literary Club, bringing along her bonsai obsession to the clubroom. Meanwhile, Akihito is warned by her mother Yayoi about the Calm approaching Nagatsuki City. True enough, the Calm creeps over the neighbourhood days later, causing Akihito to feel lethargic due to his youmu side being affected by the Calm. Izumi Nase, who has been watching over Akihito as part of the governing Spirit World Warrior clan in Nagatsuki City, attacks Akihito using a Glaciate Barrier. As a result, Akihito's youmu half reemerges as he was resting on the Shindou Residence following the attack. Akihito's sudden aggression almost endangered Ai Shindou's life, but Ai was saved by Ayaka despite being in a weakened state herself.[6]

The presence of Akihito in his youmu form is determined by Izumi as a threat that must be eliminated at once. She entrusts the role of killing Akihito to Mirai, who is later revealed to be working for Izumi since her arrival at Nagatsuki City.[7] In a decisive battle with his friend, the rampaging Akihito falls to Mirai's sword, with Mirai absorbing the youmu inside Akihito, known as Beyond the Boundary, into herself.[8]

Akihito falls into a three month long coma and when he awakens it is revealed that Beyond the Boundary is still fighting Mirai, having created a pocket dimension. Akihito uses a Spirit Stone to enter the pocket dimension and uses his newly-mastered half-youmu powers to aid Mirai in defeating Beyond the Boundary. Having used all of her blood to remove the youmu from Akihito, its defeat means that she no longer has a body. Just before she disappears, Mirai confesses her love to Akihito.

In the aftermath of this event, Izumi has disappeared for parts unknown, leaving Hiroomi as head of the Nase Clan and everything else returns to normal: Ayaka and AI return to their shop, Mitsuki continues to insult Akihito during their club activities and Hiroomi continues to harass both Akihito and his sister. Throughout it all, Akihito has kept Mirai's ring as a memento. Then one day the ring disappears from his hand and Akihito races to the roof of the school where he finds a miraculously living Mirai waiting for him.

After it is revealed that Mirai lost her memories Akihito decides not to tell her about their past, or the fight with Beyond the Boundary, he tries to hide this by telling everyone to act as if nothing happened. Throughout the movie it is shown that while he does have strong feelings for her, he does not show them so that she may live a more normal life. When she does start to regain her memories of both her powers and more and more of her past, he decides on telling her the truth. When she is attacked by the hooded figure he tries and keep her from harm, even if it involves harm being done to himself. When Mirai Kuriyama is over taken by the darkness he is willing to put himself in harms way in order to reach her, when inside her "despair" he is able to show her that she is not alone and not a monster as she states, and does not care about her past as it does not change his feelings for they both hold very heavy burdens, one being the Cursed Blood and him harboring the Beyond the Boundary. He is able to comfort her and confess his love for her.

At the end of the movie, he is shown to say "I love the Mirai without glasses as well"

Akihito is the offspring of a human being and a Youmu.

Akihito has the ability to regenerate from nearly any injury.[2]

When severely injured, Akihito's youmu side takes over, causing him to transform into a feral creature.

His eyes becomes all black with a multi-color iris and his hair remains blonde only with green highlights at the end. He is also mysteriously surrounded by green energy that is never explained.

Akihito also used his Half-Youmu power once inside the Beyond the Boundary while fighting off Youmu with Mirai, using his hand that held his Youmu powers inside.

​He can create fire at will that can easily penetrate strong force fields and cause destruction within a mile radius.

Despite their first encounter at school and her many attempts to "kill" him, Akihito maintains a friendly personality towards Mirai. The two later become friends, with Akihito eager to support Mirai in becoming a more confident Spirit World Warrior — these sentiments may have stemmed from Akihito finding out about Mirai's misfortunes that almost mirror his. It is true that Mirai has developed romantic feelings for Akihito over time. At the end of the series, it is strongly suggested that he reciprocates these feelings as he tells Mirai that a future without her would be meaningless. He also tells her that he never wanted to live a life that Mirai sacrifices herself for. He also asked Mirai out on the dream he had on his coma and blushed when Mirai tried to kiss him. Also, in episode 12, when Mirai asked if the scene around them was beautiful, he looked at her first then blushed before saying "Yeah.", thus hinting that he finds Mirai beautiful. He also mentioned in his narration that Mirai's return might be because of his feelings getting through her. And sometime in the last minutes of episode 12 he confessed that he loved loved the bespectacled beauty, Mirai.

Hiroomi is Akihito's best friend and upperclassman. Around the time they first met, Akihito's youmu side took over and almost killed Hiroomi. Therefore, following that event, Hiroomi and Mitsuki were asked to watch over him to make sure that incident never happens again. However, as time goes by, the Nase siblings become good friends that constantly tease Akihito. Akihito and Hiroomi share similar womanly opinions regarding Mitsuki and Mirai when facing various circumstances. Hiroomi affectionately calls Akihito "Akkey," much to the latter's chagrin. Hiroomi occasionally sticks his hands into Akihito's armpits much to Akihito's displeasure, claiming that they're clean and warm.

Mitsuki and Akihito have a tsukkomi-boke relationship, with Mitsuki often targeting Akihito with harsh comments as a tsukkomi to Akihito's boke. She often calls him a pervert due to his blunt obsession with bespectacled girls. However, Mitsuki does possess concern for his well-being, having protected him when she and Hiroomi first encountered him. She occasionally sarcastically remarks about Akihito about his alleged dream of her confessing her love to him.

Yayoi is Akihito's mother who continues to check up on Akihito using special postcards she religiously sends to Akihito from far away. She comes to visit him after the events of episode 10. Although her antics are usually very silly and annoy Akihito, Yayoi can also have a rather frightening side, as she is not afraid to use her abilities as a powerful Spirit World Warrior when Akihito is in danger. Despite all of their disagreements, Akihito tells his mother that she should tell more about himself someday. 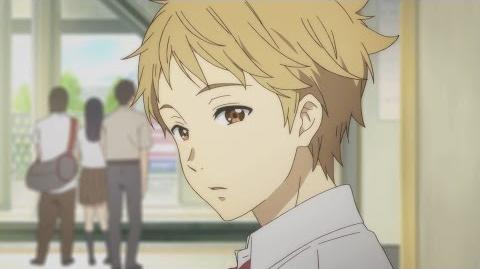