Ai Shindō (新堂 愛 Shindō Ai) is one of the secondary characters of the Kyoukai no Kanata series. She is a cat Youmu who lives with Ayaka Shindō at her photo studio where she helps Ayaka with housework and models for photos, among other things [1].

Ai takes the appearance of a cute and petite young girl with wavy mid back length wavy brown hair that has short fringes and big blue eyes. While in her Youmu form, she becomes a Scottish Fold with white tips at the end of her tails.

As a human, she has a round and innocent face accompanied by a soft, melodious voice. As described by Hiroomi Nase, her gestures are of a typical cute little sister and her hair is generally loose.

She is often seen wearing only a dark blue sailor uniform but occasionally changes her attire. Upon seeing Ai's nude picture, Mirai Kuriyama commented that the former has surprisingly large breasts, comparing them to watermelons.

Visiting the festival of lanterns, she wore a yellow kimono with a cream obi tied around by red thread and a high ponytail with a large, flowery yellow hairband.

Ai has a bubbly and cheerful personality who seems to become easily excited. Sometimes, she becomes so overwhelmed by emotion that she turns back into her Youmu form.

As seen in the plot, she often poses a warm and gentle personality with kind intentions and innocent features. She is always supportive of people around her and goes as far as possible for the sake of keeping the environment calm.

In spite of her youmu lineage, Ai lives alongside human society as a student of Nagatsuki City High School and assistant to Ayaka Shindou, who is also a youmu. She is also familiar with the half-youmu Akihito Kanbara and the Spirit World Warriors in the area because of Ayaka's occupation as a youmu appraiser.

She has helped Mirai Kuriyama, Akihito and the Nase siblings in catching youmu like the Fruit Type youmu on top of the school building by assisting in forming a idol band group (she was the star) in order to distract the youmu. However since no one planned on who will finish off the youmu they were sprayed with the youmu's defensive scent before they can attack, leading them to stink and need for constant showering.

During the Calm, Ai like most youmu, went into a lethargic state. She was almost attacked by Akihito, whose hostile youmu side manifested after Izumi Nase suppressed his human side. Ai was rescued by Ayaka in time. They were later absorbed by the massive youmu called Beyond the Boundary and fought against the hostile youmu inside with Akihito and Mirai Kuriyama.

In the Anime end credits - it is show that she is friends with Sakura Inami and they go to school together.

While Mirai Kuriyama is showing Sakura Inami a scrapbook of all the things she likes, Ai bursts in the room calling out their names. The three of them try out for the school's tennis team. During tryouts, she seems to be a natural even though she has never played before.

A few days after, her sister Ayaka Shindou and Hiroomi Nase have a serious conversation on the future of the Nase family. Ai chases after Hiroomi and apologizes, stating that her sister has "high expectations of him" and how the both of them are happy being able to live with humans.

During the photos shown along with the end credits, she is seen next to Mirai and Sakura on the tennis court, crossing the train tracks with everyone, doing a cat pose, holding a trophy, and holding onto Mitsuki Nase's sleeve in a group photo.

She usually takes the form of human, but when she grows too excited, she reverts to the form of a Scottish Fold.

She seems to be fairly athletic especially in tennis when she tried out for the tennis club. Ai also is a good singer as seen during the Fruit Youmu incident when she sang for their pop group and often cosplays/models for her sisters photography work.

Appearances in other media[]

Aside from having a role as a secondary character in the anime series, Ai stars a lead role in the Kyoukai no Kanata: Idol Trial ONA as the presiding "idol judge" who convicts key characters in the anime series for noteworthy behavior. Here, Ai has a super-deformed appearance, dressed in frilly clothes reminiscent of idol attire under the judge's black robes.

In Idol Trial, Ai was chosen to become the presiding judge by idol election, and uses her cutesy behavior to mask her rather sharp-tongued personality.

In the Mini Theater ONA - Ai stated that she is interested in doing an idol debut. 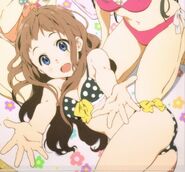 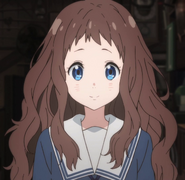